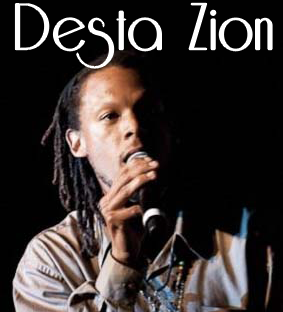 Desta Zion Wilson is a singer – songwriter and vocalist from Bermuda, who has travelled to the UK to pursue his music career. Desta comes from a family of entertainers who have made a name for them selves on the island of Bermuda!

His Mother Phiemma Caisey organised a string of shows during the first decade of the 2000’s underneath the name of Caisey Family Productions which he performed in!

As well as family singing, Desta has also sang dub-plates for various sound systems in Bermuda – this and performances at an acoustic night called Chew-stick helped to hone and fine tune his vocal skills to create his own unique sound.

He also began coaching with Bermuda’s most foremost opera singer, Marcelle Clamens. She taught Desta to sing with a more open, warmer sound!

Desta Zion is also a member of the ACM gospel choir who were semi finalist of in the BBC1 show last choir standing in the summer of 2008! In 2012 Desta Zion also made to the blind auditions of the Television show BBC The Voice. Unfortunately none of the coaches turned around however Jessie J loved his voice so much that she requested him as the only contender on her reserve list! Aside from performing with the choir and being on the voice, Desta Zion gigs regularly with an agency called Tailored Entertainment in which he landed the lead role in their Stevie Wonder Tribute band called ‘Songs In the Key Of Stevie’.

Desta is also the singer and main songwriter of the band Mighty Leap who are in the midst of recording their debut album. Desta is also in the process of recording with a company called the Eighty Sixth Floor, a tribute project to legends such as Stevie Wonder and Michael Jackson. It’s a project in which the artist gets to create original arrangements of a selected few of the legend’s tunes! Desta Zion has also recently signed a recording contract for one of his songs to the record label Tru Thoughts which will be on a various artists compilation with the likes of 80’s reggae singing sensation JC lodge!